From buy-and-hold to active investing

The original concept of the efficient frontier was introduced by Markowitz in 1952. He modelled buy and hold investments of stocks and bonds as the weighted sum of expected individual returns. According to the central limit theorem in statistics, expected returns converge to their true historical values when the average or mean is taken over an arbitrarily large number of separate samples. Therefore, Markowitz’s investment model can be considered as a weighted sum of true historical individual returns. This weighted sum of historical returns represents, in turn, a weighted average or mean. In statistics, such a mean represents an expected portfolio return over the holding period. The sum of the weightings of the long positions is normalized to one, of the short positions to minus one. One may introduce a hedging ratio as the ratio of the two sums. The ingenuity of this model lies in modelling annual expected portfolio returns, R, as a weighted sum of n annual stock returns Ri /h with h[yrs] denoting the holding period in years

and providing ways to compute the weightings wi by optimizing one’s personal investment objective in terms of rewards and risks:

where θ represents the set of unknown weightings.

Investment objectives can be of any kind. Markowitz chose to maximize the reward/risk ratios. He took the Compounded Annual Growth Rate (CAGR) as a measure of the annual expected portfolio returns and chose the Variance of the portfolio price fluctuations over time as his measure of risk. The Variance(R) is calculated from the fluctuations in the individual stock returns at sampled time periods and properly combined using the estimated weightings. The sampling frequency may be set to the inverse of a correlation time of a year, quarter, month, week, day, …, down to one tick. Markowitz calculated the portfolio weightings that maximized the mean (CAGR) with minimized Variance (Risks). His methodology is often referred to as Mean-Variance, or MV. He introduced the efficient frontier, which graphically represents a curve of maximized  portfolio rewards with minimized risks as a function of portfolio diversification (Sizing). Portfolio Sizing is directly proportional to Investment Sizing. As portfolio diversification also relates to risks, the curves reside in a Reward – Risk plane. These curves enable an investor to link portfolio diversification shown on the horizontal axis to maximized rewards with minimized risks on the vertical axis. Markowitz assumed a Normal probability density function (pdf) of the portfolio price fluctuations over time. By assuming any pdf, you simplify the numerical optimization process to a linear multivariate regression, the CPU of which increases quadratically with Sizing. This quadratic dependence may produce unreliable results for larger portfolios or when large market swings are present.

Past performance is the best predictor of success but no guarantee
When we scan the past for the time series of portfolios, we use the Annual Expected Result (AER) as reward and the Maximum DrawDown (MDD) as risk and do not make any assumption about the pdf of the reward fluctuations. The resulting portfolios are called optimal portfolios as they are maximized in rewards and/or minimized in risks. By varying the asset allocations and computing the resulting AER and MDD, you search for optima of combinations of these two quantities. Hence, you need a search algorithm to find portfolio weightings that maximize the MAR ratio (= AER/MDD) or just maximize the AER or minimize the MDD as objective functions. You could also take other ratios like the Sharpe ratio or the Sortino ratio as objective functions, but we prefer the MAR ratio. Maximizing this ratio is usually close to the investment objective of a retail investor. As stated above, we maximize the MAR ratio in a gradient ascent.

Enabling investors to link an investment to a maximum annual expected result
Portfolio managers usually select their stocks from a WatchList. We made a WatchList of some 1300 liquid stocks of Wall Street with daily-dollar volumes in excess of $1 million since 2005. We compute the time series of optimal portfolios from it with holding periods of 13 weeks. We compute these time series by using the historical eod prices from the data providers CSI and Yahoo. The chart of the efficient frontier gives the maximum annual returns with minimum drawdowns as a function of the # stocks in these optimal portfolios (solid lines): 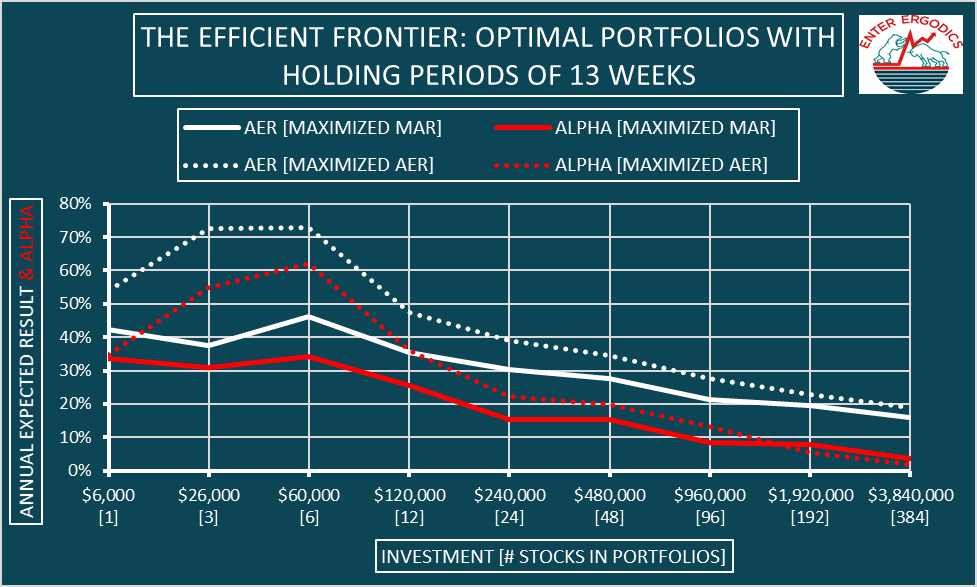 Each investment has its own optimal Annual Expected Result (AER). Portfolios are optimized, so that the weightings maximize the MAR ratio = AER/Max Drawdown (solid lines: MAR>1.2), or maximize the AER (dotted lines: MAR>0.8). A variation of what mathematicians call a gradient-ascent method was used to find the optima. The CPU used to compute all these curves is less than 10 seconds. The validation period ran from 14-July-2009 to 14-July-2019

The chart enables an investor to evaluate the maximum annual expected returns with minimum market risks given the size of his investments or portfolio diversification. This efficient frontier for our WatchList of liquid stocks can be summarized in the following table:

For example, a retail investor who wants to start investing with an amount between $1000 and $10,000 could let DigiFundManager select only one stock every 13 weeks from this WatchList of liquid stocks using some given screening and ranking conditions. His Annual Expected Return validated over the past ten years is 42% after fees and tax, with a maximum drawdown of -8.5%. During the ten years before these past ten years, the risks and rewards are significantly larger but still balanced. Using different WatchLists gives different efficient frontiers, often allowing for significant improvements by proper hedging conditions.

DigiFundManager and predicting the future, machine learning, artificial intelligence and NLP
DigiFundManager uses none of these concepts. All what it does is that it validates the past of screened, ranked, optimally weighted and timed portfolios. Validation or out-of-Sample testing is accomplished by computing the optimal portfolios on Fridays at closing and calculating the risks and rewards on the following Mondays at closing when actual rebalancing is assumed to take place. In digitizing the validation of these four activities of portfolio management, we only use the historical eod prices, volumes, dividends, and splits. According to the Efficient Market hypothesis, these historical prices fully reflect the available information. As we have seen, the past is the best predictor of success, and statistics does not distinguish between the various kinds of risks. We do not estimate or quantify a prediction interval in which a certain future observation will fall with a certain probability. We do not do such things, because the price fluctuations of the stock market cannot be fitted with probability distributions when there is blood in the Street. When we rank the 1300+ stocks out of our WatchList with liquid stocks, we do that on the basis of relative probabilities to increase in price only based on preceding price movements. For instance, on 10-Oct-2014, we computed on the basis of preceding price movements that FRO received the highest rank in the WatchList of 1300+ stocks. We did not know and had not quantified that the following quarter FRO’s share price would increase by a factor of four. Within our programmed rationale, FRO got the highest rank in the same way that other stocks got the highest ranks at other quarters. The proof is always in the pudding. Our quantitative investment system of maximum annual expected rewards with minimized risks with holding periods of 13 weeks as shown in the chart and table is a competitive system, even with High Frequency Trading (HFT).

Annual Expected Results and overdiversified portfolios
For investments between $1000 and $10,000, an investor could also decide to set up a portfolio of six long positions and pay relatively more fees. His Annual Expected Result would decrease from 42% to 22% with a maximum drawdown of -11%. An important finding is that holding periods of 13 weeks produce larger Annual Expected Results than holding periods of 1 week for portfolios selected from this WatchList. The efficient frontier of our WatchList of liquid stocks does not underperform the results of HFT. Scaling up investments to hedge-fund levels is a different expertise. If you were to scale up the investments in our largest portfolios of 384 liquid stocks, we could foresee an increase from $4 million to $500 million. However, the mission of our software service is to bring low-frequency quantitative investing to the retail investor.