How much alpha do all Wall Street stocks produce with minimum daily-dollar volumes of $1 Million?

Today, there are about 4000 non-OTC stocks traded on Wall Street that have daily-dollar volumes in excess of $1 Million. Some 1150 of those were traded from April 2007 onwards with an average daily trading liquidity in excess of $1 Million. Let us see how much alpha these 1150 stocks can produce purely based on historical prices. If the efficient market hypothesis works, all available information is reflected by the historical asset prices. Portfolio management consists of screening, ranking, weighting, timing and validation of past performance. We use historical eod stock prices to simulate these five activities and apply Market-On-Close (MOC) orders to get a realistic validation. Past performance is your best predictor of future success, no guarantee.

We estimate the 1150 asset allocations in each of the 680 weeks from 2007 to 2020 using our own weighting algorithm maximizing the MAR ratio. This computing takes about 40 seconds. The alpha we calculate stands in no relation to the alpha produced by sentiment (Is News Sentiment still adding alpha?).

Usually, the investment objective is to get the maximum risk balanced with the annualized reward. For such investments, the MAR ratio is aimed to get close to one or larger. This balancing may be achieved by properly combining long and short positions out of a given WatchList. To weekly select long-short combinations of these 1150 stocks with a hedge ratio of 50%, increases the MAR ratio from 0.21 to 0.35, the Sharpe ratio to 4.0, beta to -7.5% and reduces alpha to 8.8%:

A retail investor has no interest to invest in such a large number of stocks. He is more interested in the performance of the highest in rank of those 1150 positions. If he weekly combines the 24 top-ranked long-short positions from these 1150 stocks with a hedge ratio of 80% and scanning for a long and short correlation time of 2 and 1 week, his MAR ratio almost doubles to 0.59, his Sharpe ratio increases to 5.7, he produces an alpha of 30.6%, excluding broker fees and after 15% dividend tax:

Ranking is often accomplished by either using fundamental and/or technical indicators. We use neither of those. We use our own ranking system, which we call ergodic ranking, based on the assumption of the ergodic statistical behavior of the price fluctuations.

Including fees and tax, this game plan is uninteresting, as during 2010 – 2017 the result curve was essentially flat. When you increase the holding period to 13 weeks, the influence of the fees and tax becomes minor, and you get a MAR ratio of 0.6 and produce an alpha of 22.8% with YTD=13.7%:

By sorting out each week the 24 top performing long and short positions out of the WatchList of 1150 stocks, you still get the risk reduction from diversification. That is how you take advantage as a retail investor over a large professional investor. The asset allocation algorithm usually further increases the MAR indicator relative to the equally and price-weighted portfolios. Increasing the validation time from 12 to 32 years and screening for historical prices between $2 and $500 increases the MAR indicator to 0.75, still reasonably balanced, and produces an alpha of 33.3% and beta of -5.7%. You can clearly see an alpha increase in 1996 relative to the S&P500 and an apha decay after 2007: 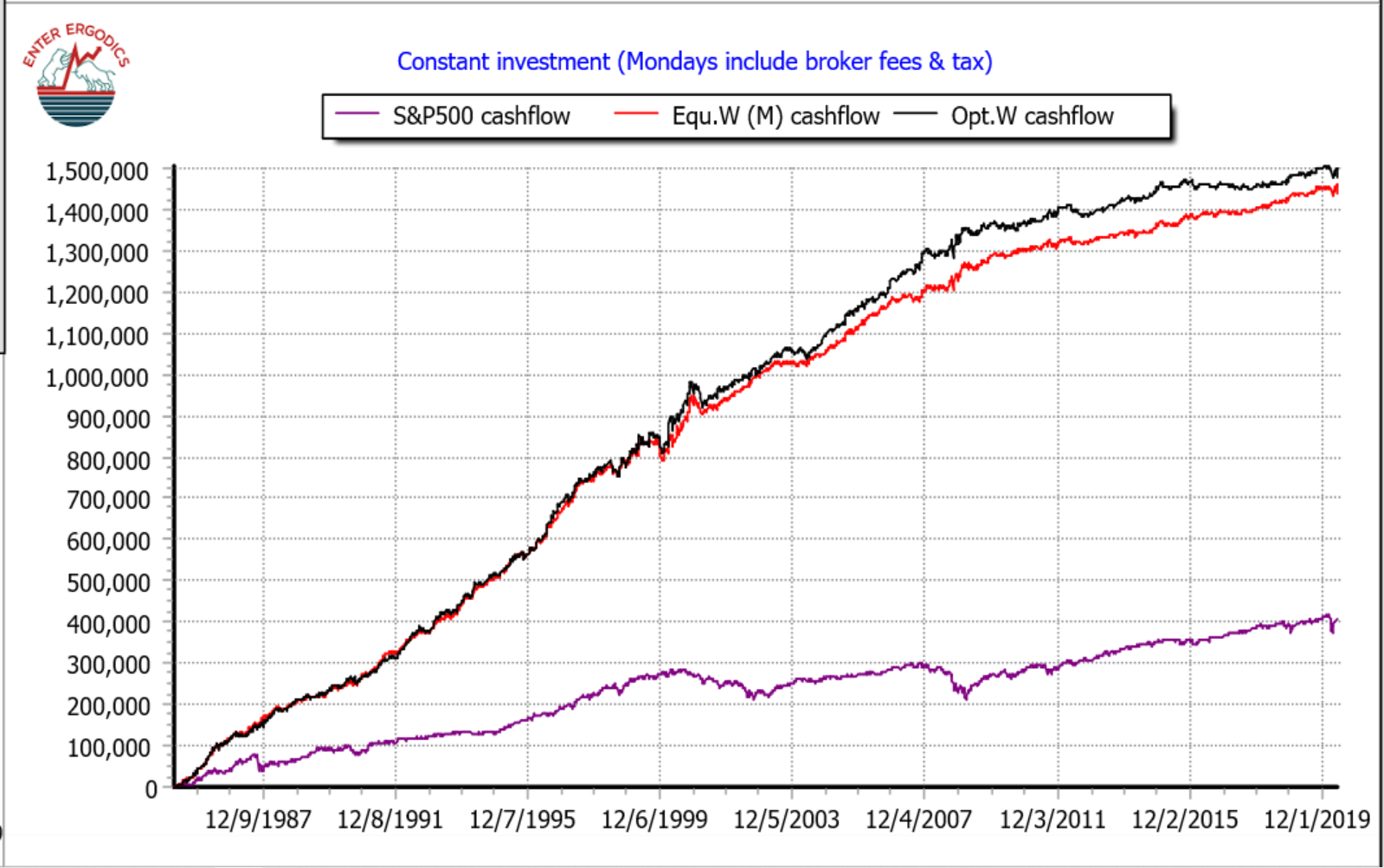 Effective asset allocation algorithms are CPU intensive and tend to fail when the market is bleeding. Our weighting algorithms are effective through the large market swings of 1987, 2001, 2009, 2018, and 2020. In these investments under consideration, they have a tendency to outweigh a few stocks, so that the remaining ones little contribute. Our money management system employs constant investment amounts at each holding period rather than allowing for possibly unrealistic compounding. The resulting free-cash-flow curve on a linear scale is uniform with the compounding investment curve on a semi-log scale. Initial investments of $1 Million during each quarter since 2002 generated just about $8 Million in free cash during the past 12 years with a maximum drawdown of $0.4 Million .